“Factual programs, in my opinion, are a sign of good economic growth within a country,” Fleck explains. “I am very pleased to see that so many of the Asian emerging markets are becoming hungry for knowledge.”

Specifically, Fleck says she has noticed an upsurge in requests for wildlife content, with territories such as Mongolia, Myanmar and Cambodia asking for titles centered on eco-friendly issues. To meet this demand, Bomanbridge Media signed on this summer to rep nature titles from South Africa’s Earth Touch. The partnership has already seen a slew of titles sold into the Asia Pacific, among them Africa’s Deadliest, which examines the hunting strategies of African predators, and A Dog’s Life, about the lives of Africa’s endangered wild dogs.

“[Earth Touch] does lovely wildlife, and they are always looking for a new angle to their beautiful animal tales,” says Fleck. “Their access to unique and rare species makes them an important producer for us.”

Fleck adds that buyers are also asking for science- and medicine-themed content, especially when they have a “fun” aspect to them. She cites as an example the medical game show Dr. What, created by NHK and distributed by Small World IFT worldwide, with Bomanbridge handling distribution in Asia. The unscripted format sees real-life junior doctors compete to determine the correct diagnosis for real-life conditions. “This format really grabs the medical genre in a clever and entertaining way,” Fleck says. 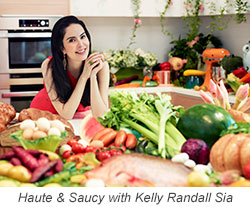 With that goal in mind, Bomanbridge has begun production on its first original title, the factual-entertainment series Haute & Saucy with Kelly Randall Sia. That program fuses the cooking and fashion genres, with the titular fashionista showing viewers how to dress and what to cook when hosting an event. “The show is guaranteed to be a hit because it embraces everything we love about cooking and couture,” Fleck explains. “Who doesn’t like sugar and sequins?” The 26×30-minute show debuted at last week’s Asia TV Forum and is being distributed globally by Bomanbridge.

As the new year commences, Bomanbridge will continue to look for factual titles to add to its robust catalogue. “We are now looking for projects which can stand out from the humdrum of TV pitches,” Fleck says.

CHECK OUT OUR LATEST CATALOGUE!